I love when new cameras come out because it drives pricing down, fuels competition, and increases innovation.  But my emails to my friends on these things is turning into spam.

I was encouraged to share the information, so I decided to blog about it.  And just so you know, I am really approaching it from a video/motion picture standpoint.  Not from a stills standpoint.  Plus, this is not news.  These are my opinions and thoughts.  Our work and workflow are specific to us.  Your opinions will vary.

The New Canon 6D.  Looks interesting but still no headphone jack (at least what I could find).

The 6D is a step up from the 5DM2 for me because of the new sensor and processor, the longer record time, and higher ISO performance.

And I just keep recording sound in dual system as we are now. Even if I got the 5DM3 I would still probably record dual system sound.  So 6D makes a lot of sense for me since I don’t need all the stills photography bells and whistles.

I asked my friend Mark M to chime in on the GH3.  Mark is a big GH series fan and user.  I saw the footage and it looks awesome but I am very invested in the Canon workflow.

Here is what Mark M had to say:

I’ll say that, unless you need SMPTE (I can hear Jeff saying “Plural Eyes” as I type that), I think a (used and hacked) GH2 is a better value. Given how much Panasonic has emphasized video on the GH3, I’m very disappointed that they did away with the multi-aspect sensor, and they didn’t include focus peaking or zebras. Also, HDMI is reportedly 4:2:0, and once you add an external recorder, you’re up in the Black Magic price range, so I’d go that way unless you already have a bunch of m4/3 lenses (which will be essentially non-functional on the passive m4/3 Black Magic mount).

Also, the new Sony NEX-VG900 looks very interesting to me.  As you may have figured out, I am a full frame fan.  I love the look of full frame, there are tons of affordable lens choices for full frame cameras (DSLR), and I really understand focal length characteristics.

The Sony full frame camcorder has an XLR adapter, a flip screen, Auto Focus (most likely with Sony Lenses).  I don’t think it has a recording time or size limitation (don’t quote me on that).  The codec is AVCHD but you can record uncompressed HD from the HDMI output.  It can also shoot RAW stills.  I have not had great experience with AVCHD but it works.  Basically, I could use the AVCHD in run and gun situations and if we need the boost in quality, we can record uncompressed to an external recorder.  Though honestly, I  have not tested the difference between the two.  Maybe you only need the uncompressed to aid in post effects work.

Plus the price is under $3300 for the body.  Sounds like the perfect camera.  I might be getting this.  The hope is that Metabones makes an adapter that utilizes my investment in Canon lenses.

Here is Engadget’s take on the camera:

Hopefully it can take the metabones adapter.

Here is a link to the Sony Store:

Man, this camera has a ton of hype and I am adding to it.  It’s a pretty amazing camera for a first camera from a company and especially for what it does.  And really the only thing that it does is shoot RAW while only costing $3000.  That is the breakthrough for this camera.  The codec it uses is the highest quality codec that I know of.  Other cameras that can shoot this format but start at over 5 times the price (to actually shoot something because viewfinder, media, accessories are sold separately).  Those cameras shoot the big budget productions of Hollywood in the theaters and TV screens around the world.  Basically, you can shoot the same exact format as those high budget productions.  This camera has leveled the playing field.

But the Black Magic Cinema Camera is not perfect.  Cons include:

But with all of those drawbacks for me, it is still an amazing camera choice.

Wow.  Interchangeable lenses, 4K upgradeable, and 240fps at 1080p for $8000.  This is a great time to be a filmmaker.  It also has great low light performance, XLR input, a small form factor, and up to 960 fps at lower resolution. 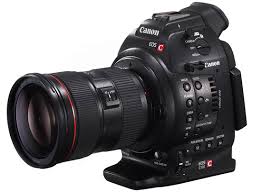 Great camera but not the greatest codec.  Why AVCHD?  Maybe it’s easier and cheaper to produce this hardware/software combination.

I’m leaving out some other cameras that were recently announced just because they are not so relevant to my current workflow.

Use the best camera and tool that you can get your hands on and that is best suited for the job.  I personally believe content trumps format, technology, etc.  Content is king.  As you know, you can have the world’s greatest gear but if your content stinks no one cares.  And the converse is also true, if you have terrible gear but your content is amazing, you can change the world.  Or at least change someone’s world for a moment.

And if you’re wondering what camera I will get next, who knows.  I think I am leaning toward the Canon 6D.  It fits my current workflow really well and the price is really attractive.  I may get the Sony NEX-VG900.  Price is really attractive as well and has a ton of great features, the only concern is how it will fit in my current workflow.  I guess it comes down to figuring out if changing workflow is worth those extras that come with the VG900.  I believe the VG900 comes out in October, so will examine it there.

P.S.  If you read this, cool.  I am just putting it out there as a way to organize my thoughts and, I guess, to actually do what a “blog” is supposed to do and be a “web log.”  I was encouraged by a few colleagues to post this type of stuff on the blog.  More to come.

All images copyright belong to their respective owners.

How to Create Habit Forming Products